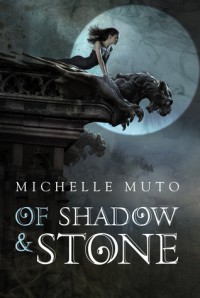 Kate Mercer is a rising actress. Working hard to make her way into the spotlight, she has finally achieved recognition and landed a role in a film trilogy that put her in the public eye at all times. While she enjoys the fame, she hates the other things that go along with it like paparazzi following her everywhere, crazed fans stalking her, and annoying ex-boyfriends. So when she starts dreaming of herself at a castle, she welcomes the change of scenery. Is she really dreaming or is she actually transporting to this mysterious castle so she can take her role as the next sentinel?

I am conflicted with this book. While I love that the book is written about gargoyles, I wish the story line would have featured them more. By the synopsis, I was led to believe that Kate was a mortal that was chosen to be the next sentinel so that she can control the awakening gargoyles. However, the story didn’t really focus on that aspect of the book until the end and even then, it was very short. The majority of the book was detailing her life as an actress, a crazy stalker who is following her because he loves her, and a boyfriend who is only with her because her fame helps his career. There was also more focus on the secondary character, Ian, who is a novelist who is currently staying at the castle so that he can overcome his writer’s block. It is never really explained other than a few lines here and there, how she can actually transport to the castle, what the job description of being the next sentinel is (other than to control the gargoyles until she can put them back to sleep), why the gargoyles are changing, and so forth. I wish there had been more back story on the paranormal aspect rather than the minor details of Kate’s love life, or lack thereof.

Overall, this was an okay read. I’m torn between rating this story a two or a three. The story had a great concept, it just lacked in the way it was executed. However, I loved that it had gargoyles in it, even if briefly, and there aren’t many novels, at least that I’ve read, that include them. Because of that, I’ll push the rating up to a three.

I was provided a copy of this book via NetGalley in exchange for an honest review.